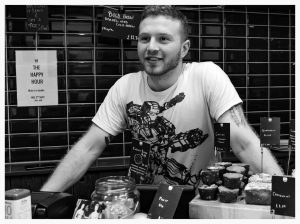 Acting always seemed like a natural progression for me, something I could do and do well. What drew me in were the stories. I remember my Dad telling me how important drama was to the Greeks, how attendance was a necessity as they tried to make sense of the world around them. Even now I believe drama has the same importance in the world no matter how much it has changed. There is a story for every time, every mood and every feeling and each time we hear one, old or new, we learn. That’s why I do this, you never stop learning and you never should.

Yes, first with National Youth Theatre and then at Drama Centre London in 2011 on a foundation course. Later I studied at the Identity School of Acting and finally at Room 1 with James Kemp. I’m not sure I’ll ever stop training, a musician never stops practicing and neither should an actor.

Don’t give up and don’t quit but if life starts taking you in another direction don’t be afraid to try that as well. If you’ve only ever lived as an actor how will you pretend to be all the characters we meet in these stories? Confidence is key but arrogance is ugly. Trust yourself – if you don’t have trust you might as well give up now and go find a nice beach somewhere to sit, read and drink because it won’t get any better if you’ve already started thinking it won’t.

Intimacy is easily achieved. When working on stage it becomes natural to project. With radio there is no need, the microphone is close and the headphones are in the listener’s ear. If you raise your voice too much it becomes irritating, a shout is full blown aggressive. Instead I found that that dreadful saying, “less is more” is very relevant.