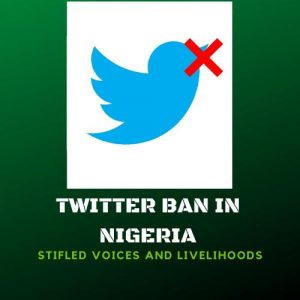 On the 5th of June 2021 the Nigerian Government announced they were banning the operations of popular social media platform twitter in Nigeria after the platform deleted a tweet by the president of Nigeria which violated their community rules. Expectedly, the ban was condemned by the international community, and the story gained local and international news coverage, but the vast majority of media reports I monitored about this story focused on analysis about the political ramifications of the ban and the international reactions to it. In filing my own report about the twitter ban story, I decided to put individual voices to the story and highlight the fact that this ban will disproportionately affect the youths of Nigeria who in the midst of one of the highest youth unemployment in the world have deployed their talents and ingenuity on social media platforms like Twitter in a multiplicity of ways to make a living for themselves. Despite being in the United Kingdom, getting to interview people back in Nigeria was not challenging as I have built networks in my community over the years as a local reporter and community organiser. Nigerians are not known to hide their thoughts and feelings about an issue but I was particularly struck by the level of emotion with which some of my interviewees spoke about the ban, with some interviewees going forward to declare that Nigeria is on the cusp of a dictatorship.

From my interviews, I got the sense of a people being pushed to the wall by a government that has done very little to help them and most were going to speak up. Going forward with Podium, I intend to continue telling stories that matter which might be overlooked by mainstream media.