Richard Brooks attended our Oxford drama workshop.  He tells us what happened afterwards.

I was pretty surprised to see that Podium.Me was running audio fiction workshops in nearby Oxford and didn’t hang about signing up. I’m glad, because I would have never anticipated it helping me to fulfil a life-time ambition.

I thought I knew audio drama pretty well. I’ve been lucky enough to have a number of my plays – mostly knock-around comedy-horrors – produced in the past. I even study and comment on the sector as an academic. So, I came with maybe a bit of a chip on my shoulder, there to learn, but not expecting to make any great changes.

I quickly changed my view on that. The sessions were robustly practical and constantly challenged me to think about how I wrote. Moreover, although most other participants didn’t come from an audio fiction background, they did come from other fields, theatre, prose and even graphic novels. It was a great mix of people and perspectives that helped me reconsider my style. I came out, wanting to do something different and maybe take a bit of a risk.

The result was the production A Haunting Beyond the Lake. A ghost story and love story, it was an idea that had been on my mind for more than fifteen years. Normally I would write it up, consider it, and put the script back in my drawer. This time I decided to take a gamble and write a story that was a bit more realistic than normal, more sentimental and a lot more raw. I wanted to do something that would surprise people with the twist, but at the same time make them think back to their own decisions in their lives.

The story was more successful than I could possibly have hoped. The cast and crew were passionate about it, we received fantastic feedback and it went on to win the Audience Award for the UK International Radio Drama Festival, an incredible result – helped along by votes from the Podium writing group.

For me, it was also a personal story, and though entirely fictional it’s inspired by a friend, Jenna Matlay, who died young and to win it for her was more of a joy than I could have imagined. 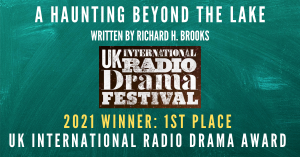