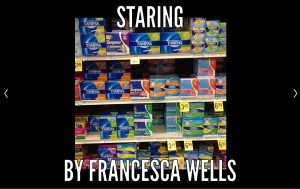 ‘Staring’ can be heard here.

When I was asked by Podium.me to produce drama with the under 25s, I jumped at the chance. Podium had already won awards for its unique peer-to-peer journalism, why not the same for drama?

I’ve been listening to radio for as long as I can remember, everything from Listen with Mother and Afternoon Drama, to The Hitchhikers Guide to the Galaxy and the comedy genius of the transgender Hinge and Bracket. My facts were from the Today Programme and PM – but then I’m from the generation that grew up with the radio in the kitchen; and the radio was always on.

But why radio drama? Isn’t it a bit old-fashioned? Surely, most young people don’t even own a radio. If the milkman appeared at your door, wouldn’t you think you’d gone back to a post world war Britain, or a 1970’s sitcom land? Isn’t it the same with radio? The days of the wireless are over. What even is a ‘wireless’? Why awaken the next generation of snap chatters, instagrammers and tweeters to audio drama?

There is a world of possibility in audio drama and potential for comedy, too. Radio might be the closest medium to film. Instead of images, pictures are being created in sound and because there is no restriction by the huge budget necessary to recreate the images visually, the story can be located anywhere: from Mars or the North Pole, to a future world dystopia where giant insects rule. Science Fiction and Fantasy have long recognised the benefits of radio drama: The Hitchhikers Guide to the Galaxy in 1978; Neil Gaiman’s wonderful Neverwhere set in a parallel universe beneath the streets of London; Elvin Quest set in Lower Earth – a satire on Tolkien’s milieu.

Remember the milkman? His disappearance from the modern world was heralded as the end of an era , but it wasn’t. In fact, with advances in technology online shopping evolved and home delivery boomed. This is the case with radio; technology has led to the ability to stream online content anywhere. Now we demand audio material wherever we go.

Online radio is thriving. Nowhere is this more apparent than in the rise of the American Podcast Revolution: the popularity of podcasts like the Mystery Show in which Starlee Kine solves every day mysteries and Serial which although based in fact is shaped in the dramatic form of a thriller.

Audio drama is undergoing a Renaissance, too: The Truth featuring dramatic short stories combining great writing and quality performances with rich sound design; Welcome to Nightvale – a fictional night radio station set in a an American desert town – reaching no 2 in the iTunes chart; Limetown – the mockumentary thriller investigating the disappearance of 300 men, women and children from a small town in Tennessee attaining the no 1 position in the iTunes chart..

The BBC aren’t releasing the next series of Doctor Who until sometime in 2017, but audio drama episodes are being produced by Big Finish Productions online and on Radio 4 extra.

The internet and smartphones have made audio the perfect medium for young writers to cut their teeth: quicker and cheaper than putting on a play or producing a film. My aim is for Podium.me to be at the start of the audio drama revolution. I want to be a part of encouraging and supporting a new generation of new writers for audio.

I hope you enjoy our series of eight monologues – they’re just the start of more things to come!